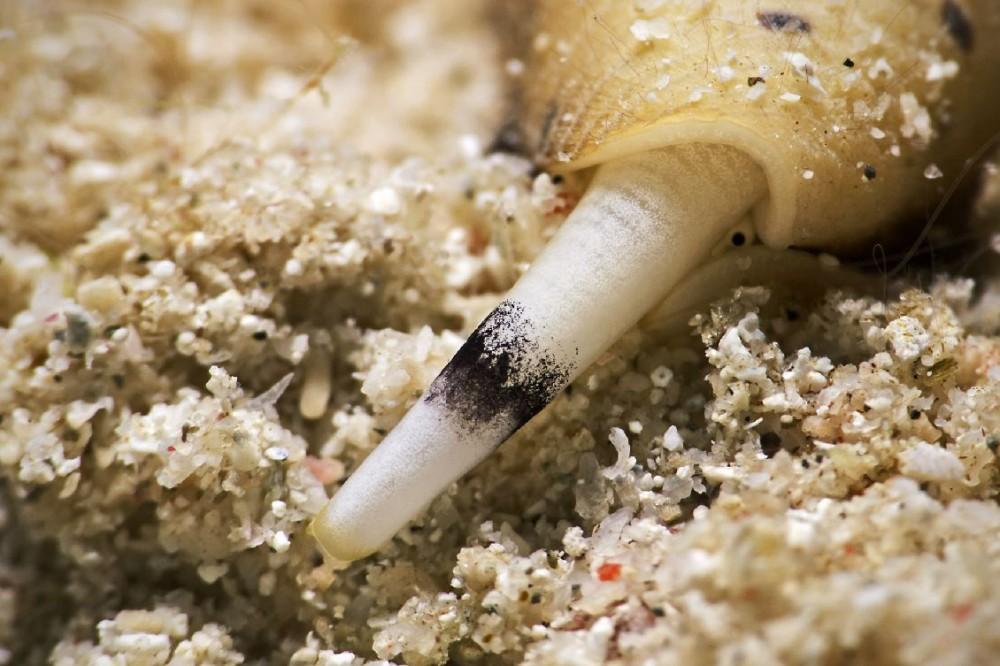 Conotoxins are bioactive peptides found in the venom that marine cone snails produce for prey capture and defense. They are used as pharmacological tools to study pain signalling and have the potential to become a new class of analgesics. To date, more than 10,000 conotoxin sequences have been discovered. Associate Professor Markus Muttenthaler from the Faculty of Chemistry at the University of Vienna and his colleagues from the University of Queensland in Australia are experts in the field of venom drug discovery and have now provided an overview on the status quo of conotoxin research in the top-of-its-class journal “Chemical Reviews.” In another recently published study, the researchers have furthermore developed fluorescent labelled conotoxin versions to visualise pain receptors in cells.

The marine predatory cone snail is well-known for its effective envenomation strategy, which helps the relatively slow-moving animal to catch their prey such as fish or molluscs and to defend itself. The cone snail paralyses and kills their prey with the help of a very selective and potent cocktail of venom peptides, which is injected into prey through a harpoon-like needle.

“Cone snails can control their venom composition depending if they hunt or defend themselves,” says Markus Muttenthaler from the Institute of Biological Chemistry at the University of Vienna. “For pain research, we are particularly interested in the venom of a defending cone snail, as its composition is aimed at causing pain and its individual components can be used to study pain pathways,” the ERC Starting Grant awardee states.

High diversity of species and compounds

To date, an estimated 750 species of cone snails are known. A typical venom contains hundreds to thousands of bioactive peptides, with typical lengths of 10 to 40 amino acids. These conotoxins display well-defined, protein-like structures, which are stabilized through multiple disulfide bond frameworks. Conotoxins are also active on human receptors (e.g., ion channels), which is of particular interest as they thus can be used as tools to study pain pathways in humans.

“Conotoxins have revolutionised pain research since their extraordinary potency and selectivity enables us to study the individual subtypes of ion channels, which was not possible before,” explains Markus Muttenthaler. With the help of conotoxins, researchers can now define the physiological as well as pathological relevance of the different receptor subtypes.

One conotoxin has already received FDA-approval (Prialt®) for the treatment of severe chronic pain. It is directly administered to the spinal cord where it specifically blocks a pain transmitting ion channel subtype — “it is 1,000 times more potent than morphine and triggers no symptoms of dependence, which is a big problem with opioid drugs,” says Muttenthaler. Current research focuses now on conotoxins that could already target nerve endings outside the spinal cord, which would facilitate administration. “This would enable us to intercept the pain signal before it is transmitted into the central nervous system.”

New analytical advances in the fields of venomics, proteomics and transcriptomics have led to the discovery of many new conotoxin sequences in recent years. The synthesis and pharmacological characterisation, however, is comparatively more time-consuming.

Conotoxins can furthermore be functionalized and provide outstanding leads for new molecular probes: In another paper published in the “Australian Journal of Chemistry,” the researchers developed a new methodology to label conotoxins and use them to visualize ion channels in cells. These tools are important for a better understanding of the complex biology behind pain, which is a leading cause of disability in the world.